From satellite imagery to street views to indoor mapping, technology has disrupted our past world. This has left us dependent upon new ways to visualise large spaces. This new world has brought many benefits and risks. But what does that mean for the security professional or facility manager today and what technologies can be used to secure buildings and improve facility operations?

A Brief History Of 3D Technology
Starting May 5, 2007 (inception 2001), Google rolled out Google Street View to augment Google Maps and Google Earth; documenting some of the most remote places on earth using a mix of sensors (Lidar/GSP/Radar/Imagery). The mission to map the world moved indoors May 2011 with Google Business Photos mapping indoor spaces with low cost 360° cameras under the Trusted Photographer program. In the earlier days, 3D scanning required a high level of specialization, expensive hardware and unavailable computing power

In the earlier days, 3D scanning required a high level of specialization, expensive hardware, unavailable computing power and knowledge of architectural software. Innovation during the past 8 year, have driven ease of use and lower pricing to encourage market adoption.

Major investments in UAVs in 2014 and the commercial emergence of 360° photography began a new wave of adoption. While 3D scanners still range from $20K – $100K USD, UAVs can be purchased for under $1K USD and 360° cameras for as low as $100. UAVs and 360° cameras also offer a way to document large spaces in a fraction of the time of terrestrial laser scanners with very little technical knowledge. Access to building plans, satellite imagery, Google Street View, indoor virtual tours and aerial drone reconnaissance prove effective tools to bad actors

The result over the past 10+ years of technology advancement has been a faster, lower cost, more accessible way to create virtual spaces. However, the technology advances carry a major risk of misuse by bad actors at the same time.

he weaponization of UAVs is of particular concern to the Department of Homeland Security: “We continue to face one of the most challenging threat environments since 9/11, as foreign terrorist organizations exploit the internet to inspire, enable or direct individuals already here in the homeland to commit terrorist acts.” 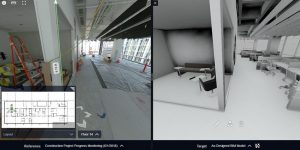 What Does This Mean For The Security Or Facility Manager Today?

Renovations, design changes and office layout changes leave facility managers with the wrong information, and even worse is that the wrong information is shared with outside consultants who plan major projects around outdated or wrong plans. This leads to costly mistakes and increased timelines on facility projects.

There could be evidence of a suspect water value leak which using BIM could be located and then identified in the model without physical inspection; listing a part number, model, size and manufacture. Identification of vulnerabilities can dramatically help during a building emergency.

First Responders rely on facilities managers to keep them updated on building plans and they must have immediate access to important building information in the event of a critical incident. Exits and entrances, suppression equipment, access control, ventilation systems, gas and explosives, hazmat, water systems, survival equipment and many other details must be at their fingertips. In an emergency situation this can be a matter of life or death.

First Responders rely on facilities managers to keep them updated on building plans. A simple 360° walk-through can help first responders with incident preparedness if shared by the facility manager. Police, fire and EMS can visually walk the building, locating all critical features they will need knowledge of in an emergency without ever visiting the building. You don’t require construction accuracy for this type of visual sharing. This is a solution and service we offer as a company today.

Reality capture is rapidly becoming the benchmark for facility documentation and the basis from which a security plan can be built. Given the appropriate software, plans can be easily updated and shared.  They can be used for design and implementation of equipment, training of personnel and virtual audits of systems or security assessments by outside professionals.

Our brains process visual information thousands of times faster than text. Not only that, we are much more likely to remember it once we do see it. Reality capture can help reduce the need for physical inspections, walk-throughs and vendor site-visits but more importantly, it provides a way to visually communicate far more effectively and accurately than before. But be careful with this information. You must prevent critical information falling into the hands of bad actors.

You must watch out for bad actors attempting to use reality capture as a threat, especially photo/video/drones or digital information and plans that are posted publicly. Have a security protocol to prevent and confront individuals taking photos or video on property or flying suspect drones near your facility and report to the authorities. Require authorization before capturing building information and understand what the information will be used for and by who.There are a number of technologies to combat nefarious use of UAVs today.

Nefarious Use Of UAVs

There are a number of technologies to combat nefarious use of UAVs today, such as radio frequency blockers and jammers, drone guns to down UAVs, detection or monitoring systems. Other biometrics technologies like facial recognition are being employed to counter the risk from UAVs by targeting the potential operators.

UAVs are being used to spy and monitor for corporate espionage and stealing intellectual property. They are also used for monitoring security patrols for the purpose of burglary. UAVs have been used for transport and delivery of dangerous goods, delivering weapons and contraband and have the ability to be weaponised to carry a payload.Investigating reality capture to help with accurate planning and visualization of facilities is well worth the time

The Federal Aviation Administration has prevented UAV flights over large event stadiums, prisons and coast guard bases based on the risks they could potentially pose, but waivers do exist. Be aware that it is illegal today to use most of these technologies and downing a UAV, if you are not Department of Justice or Homeland Security, could carry hefty penalties.

Facility managers must have a way to survey and monitor their buildings for threats and report suspicious UAV behaviours immediately to authorities. At the same time, it’s critical to identify various potential risks to your wider team to ensure awareness and reporting is handled effectively. Having a procedure on how identify and report is important.

Investigating reality capture to help with accurate planning and visualization of facilities is well worth the time. It can help better secure your facilities while increasing efficiencies of building operations. Reality capture can also help collaboration with first responders and outside professionals without ever having to step a foot in the door. But secure your data and have a plan for bad actors who will try to use the same technologies for nefarious goals.